For the last 5 months my studio has been completely solvent free! I didn't know how easy it would be to make the switch! For anyone that paints alla prima I recommend this method 100%.  If you like to paint in a glazing or layering method this might not work for you.  I pretty much only used the solvent (Gamsol) for thinning the wash to tone the surface at the very beginning of the painting, and to clean my brushes, both while I was working and for clean up.  As for thinning the paints, that's never really something I do, I always just use a touch of walnut oil to loosen them up a bit.
Well apparently you can also use walnut oil to clean your brushes! (I didn't believe it was true until I tried it).  Did you know they sell walnut oil in giant containers like this? 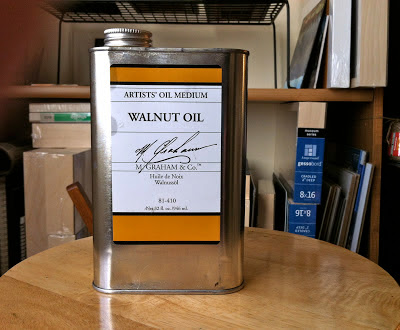 It was kind of expensive ($28 I got mine at blick) and I was expecting to have to use a LOT of it to get the brushes clean. But that wasn't true at all. Turns out I could fill my solvent container with only about 1/4 cup of oil, and that quarter cup has lasted me 5 months so far.  Turns out $28 wasn't a bad price at all! (update: that first quarter cup of oil lasted me for 7 months! Finally just broke down and changed it.) 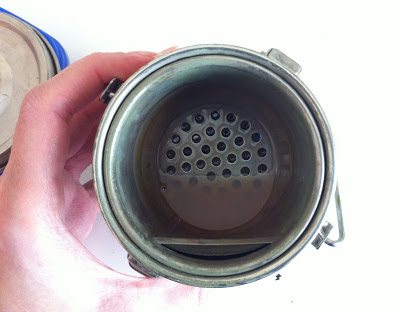 To clean my brushes I just wipe the excess paint on a paper towel or rag, and then swish in the oil the same way that I would the solvent.  It totally works! And as an added bonus the condition of my brushes has improved immensely since I started working this way. I haven't even been using soap and water afterwards like I usually did when cleaning with solvents.
I also went through all of my oil colors (and there were a lot of them) and removed the colors that have potential toxicity (cadmiums, cobalts, ones with lead etc).  I felt like I was in a chemistry class again, there was some very dense paperwork to go through. 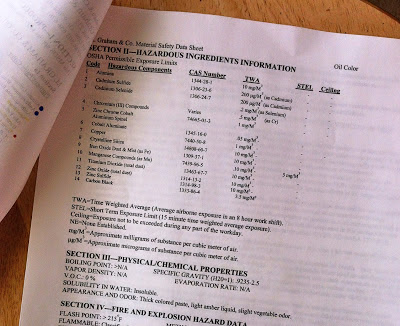 But after hours and hours of research  I'm confident that the pigment in my chosen paints are safe.  But just in case I've also been wearing gloves while painting :) 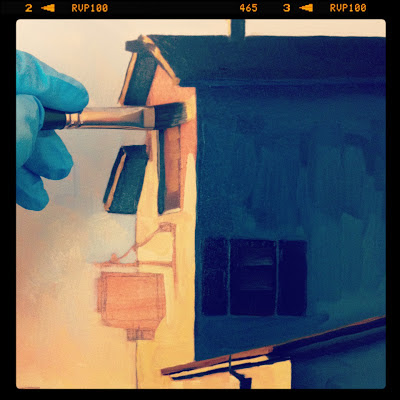 And now all my paints (mostly M. Graham) fit in my sweet little carrier.  I like the M. Graham brand since they use walnut oil as the binder. So why this sudden-ish concern for health? Well one reason is because my new studio isn't as easily ventilated as my last one, and the other (more important) reason is that we're expecting a little one in June! :) and guess what?