A similar painting to yesterday, except this one has me in it! I really wanted to feature this particular painting but no one would stand in front of it just right, so I had to do it myself. 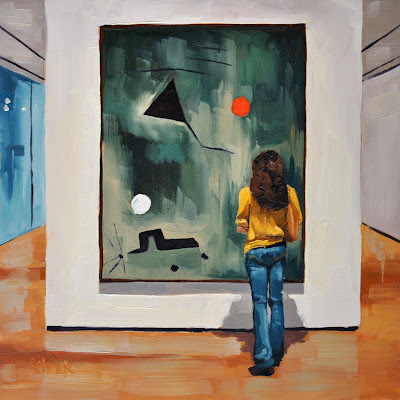 I found a new game to play while I was at the MOMA.  This was fun to paint because I got to reproduce a Klimt painting and try to reproduce the look of interior lighting on a figure...not the easiest thing to do. I had another go at this group, I felt rushed while I was painting it though, so I'm not as happy as I was with the first one.  However there are certain parts of it that I really like. 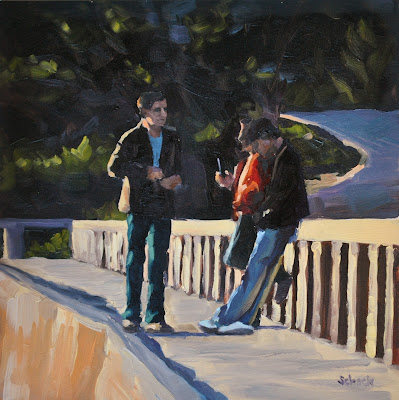 Oil on panel, 6x6 inches
Contact me for purchase information

In Between Classes - 6x6

I assume this couple was on a break from classes, judging by the backpack, either that or they were having a DTR (define the relationship) talk.  Whichever one, the light was hitting them perfectly and that's what mattered most to me! 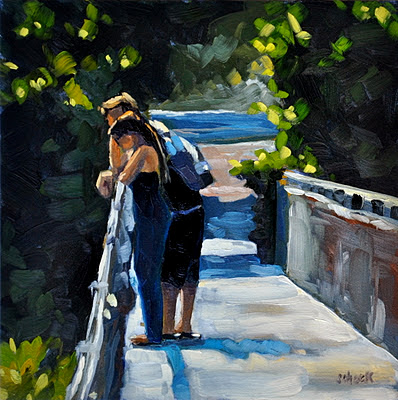 I switched up my color palette for this painting. I took out certain colors that I deemed as "shortcuts" (Burnt Sienna, Burnt Umber, Yellow Ochre) or ones that I was just using too much of (Sap Green) and I added a few that have been neglected in my paint drawers for months, such as Quinacridone Rose and Cadmium Green Pale. I also spent more time working the shadows before adding any of the light...